Most visitors to Belize head straight for the offshore cays. Nothing wrong with that; the diving and snorkeling are some of the best in the western hemisphere. But the country is small enough—about the size of Massachusetts—to offer some intriguing inland adventures as well. Besides, the communal and grassroots nature of virtually all Belize’s enterprises means that travelers can be assured the footprint they leave will sustain local human and natural resources. Small-scale, informal guide arrangements provide local knowledge and control, and—given the ethnic complexity of the country—offer great opportunities to meet folks from the various heritages. 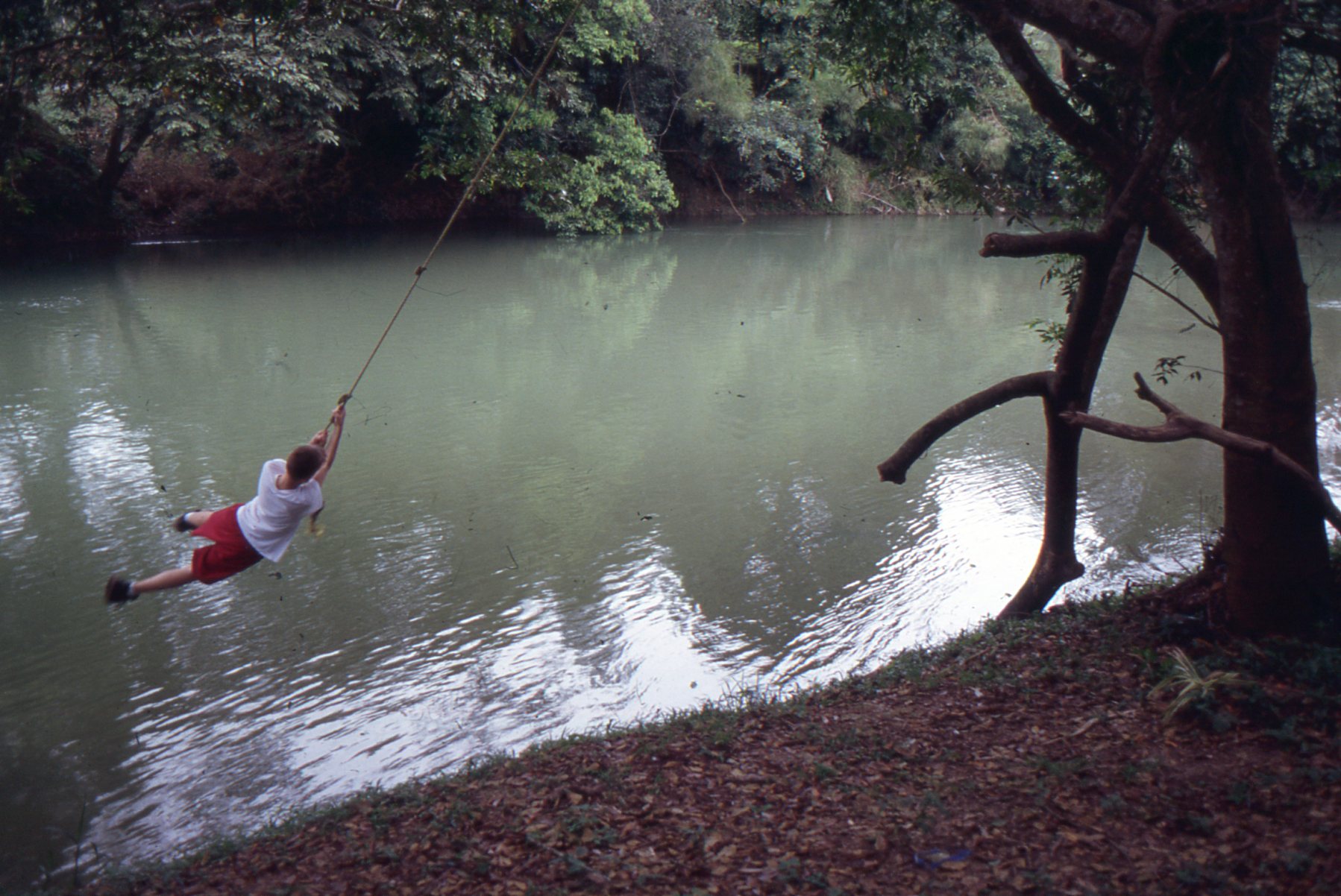 A rope swing on the Mopan River at Parrot Nest lodge tempts Evan Gabriel into a daredevil leap.

Just two hours west of Belize City is the Cayo District, a secluded upland rainforest sprinkled with fertile valleys that are wedged in between mountains, rivers, and pine savannah. Once considered the most isolated part of Belize, the region has now been opened up for adventure travel experiences of all sorts. Cave tubing, river kayaking, horseback riding, expeditions into overgrown Mayan ruins . . . or just sitting on the verandah of a jungle lodge. And just west, over the border into Guatemala, lie some of the most thoroughly excavated Mayan remains in the world—the imperious Tikal.

We visited Cayo in the heart of winter with our two teenage boys. While the tinselly Christmas decorations seemed a bit incongruous, it was a thrill to go from icy winds to the soft patter of rain falling off the jungle canopy and fifty shades of green surrounding our field of vision. We stayed in one of the cheapest jungle lodges in the area: Parrot Nest, outside the village of Bullet Tree Falls. Our thatched cabin on stilts slept four, and the Mopan River at the edge of the lodge’s grounds offered some great midday swimming. Pacas and agoutis scuttled between the bushes, “Jesus-lizard” basilisks lurked in the trees, and several pet tarantulas could be coaxed out from holes in the lawn. Even just sitting on the verandah listening to the palm fronds rustle was a wintry delight. 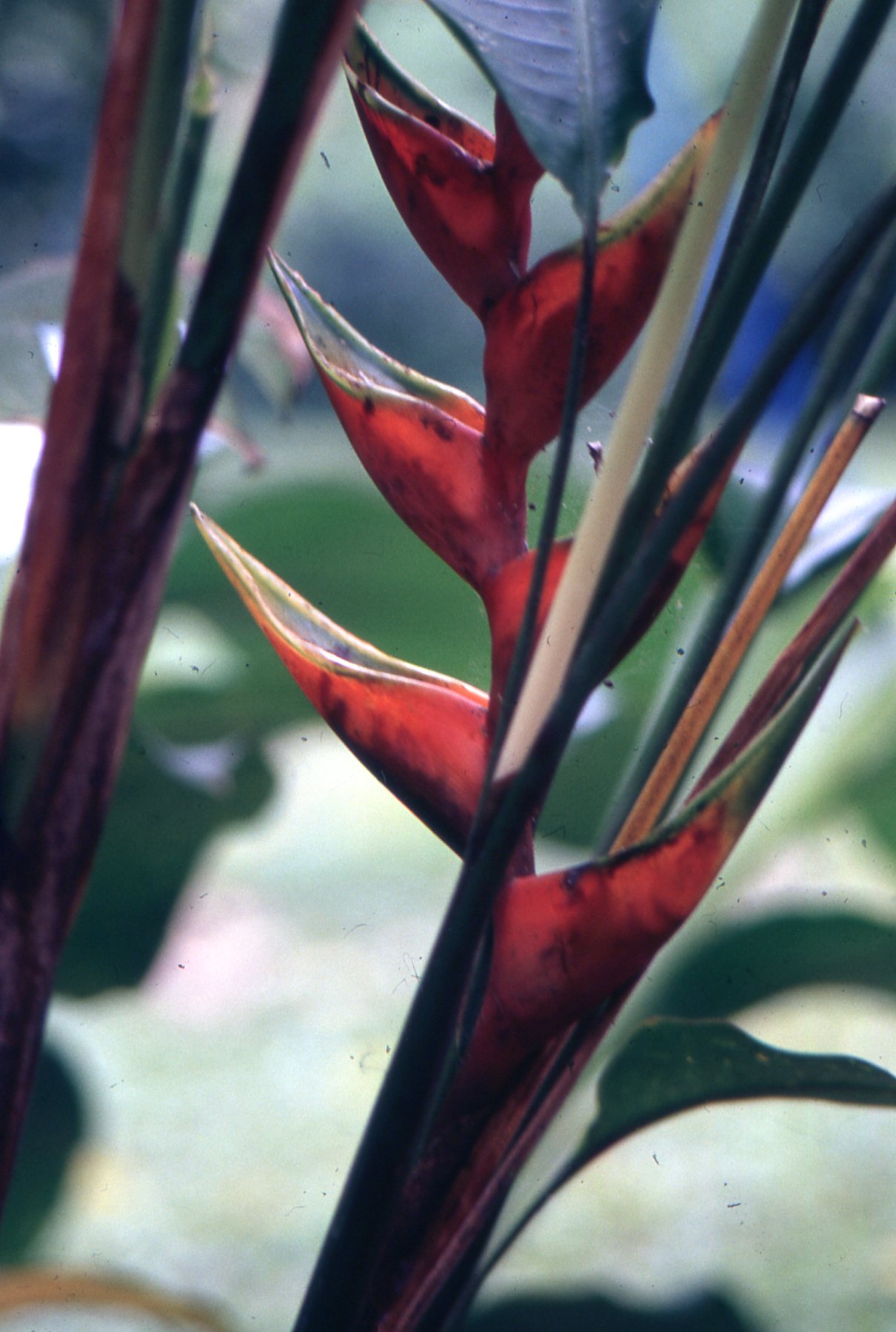 The grounds of Parrot Nest lodge are laced with vibrant flowers like this bird-of-paradise.

But our family needed action too. We spent one day exploring Barton Creek Cave, a site discovered in 1994 that still houses Mayan skulls and pottery remains. Straggling along a long dirt road deep in the mountains south of the Western Highway, Barton Creek is home to one of the more traditional Mennonite settlements in Belize. The spacious farmsteads provide most of Belize’s dairy products and chickens, but try not to stare too hard when the horse-and-buggy sets go by.

With a pair of guides, our group of six took canoes into the cave and spent an hour or two drifting along the dark passageways, lit by powerful torch lights provided by our guide. We saw bat nests, silvery fish, and huge cathedrals of dripping stone chambers that rose into a dark and distant ceiling. At times we lay flat in the canoes in order to edge our way past low-hanging pillars of rocks. At the far end, we unhitched inner tubes and the boys delighted in paddling along through the darkness as we headed back out to the trail. 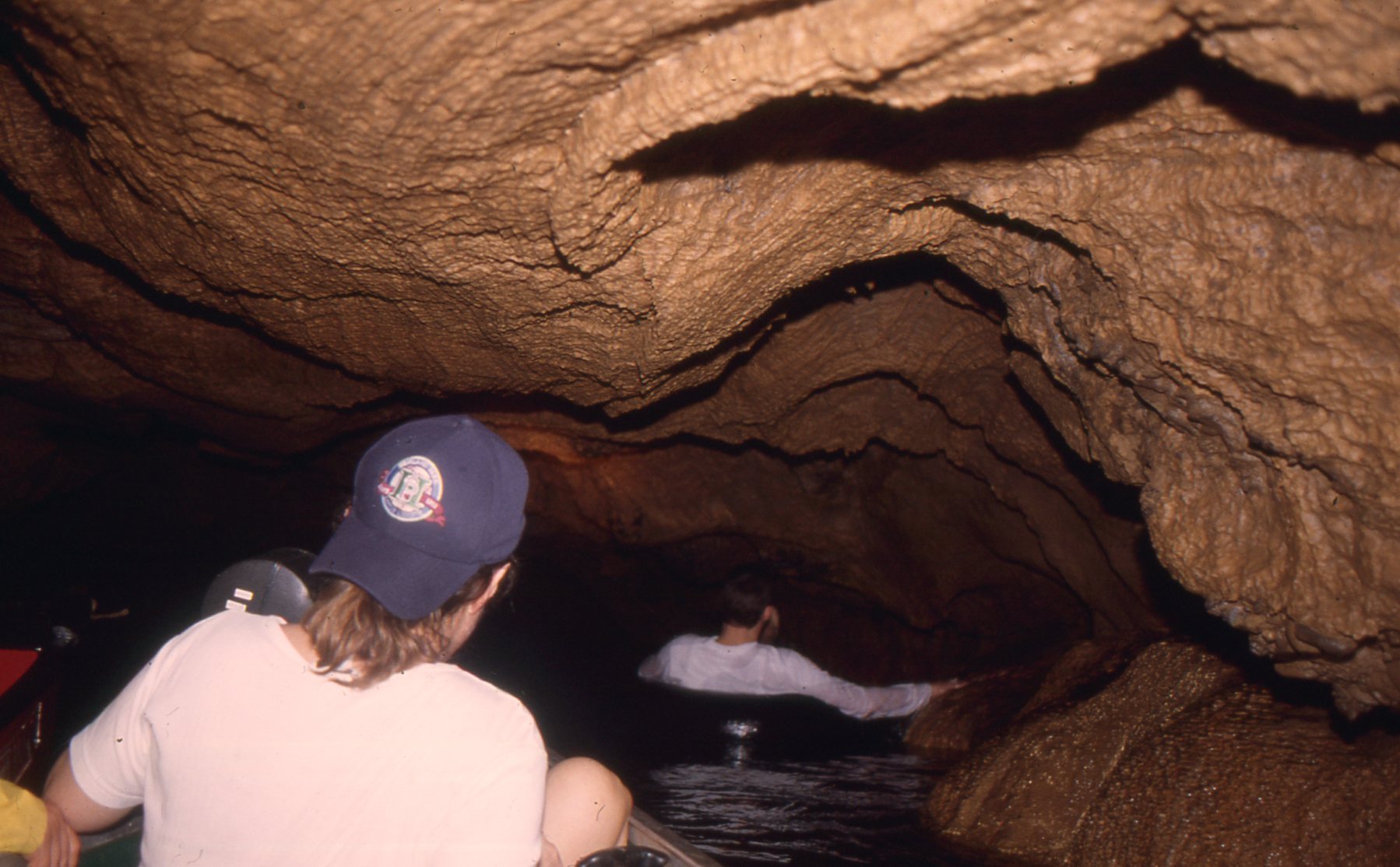 Some stretches of Barton Creek Cave are so low that riding an inner tube is the only practical way through.

For more caving, try Che Chem Ha, which was only discovered in 1999 when a farmer’s dog chased a gibnut into the cave’s mouth. Che Chem Ha was used extensively by the Maya for food storage and rituals. Nearly a hundred artifacts have been found inside and touring with the original finders of the cave, the Morales family, takes you along narrow passages past intact ceremonial pots.

The “ultimate” Belizean cave experience is the all-day trip through Actun Tunichil Muknal. The only way in leads through creeks and lush jungle, followed by a plunge into a 20 foot-deep pool. Inside are shimmering rock formations, pottery vessels, and even human remains. National Geographic filmed scenes from Journey to the Underworld here.

Another day we hopped a local bus to the village of San Jose Succotz near the Guatemalan border, then rode a hand-cranked ferry across the Mopan to the site of the ruins of Xunantunich. This Mayan site is nowhere near as grandiose as Tikal, but it offers a usefully compact set of partially-excavated ruins, including the 130 foot-high El Castillo, which was long considered to be the highest building in Belize. (Recent excavations at the remote site of Caracol have found a temple comb that is a few feet higher.) 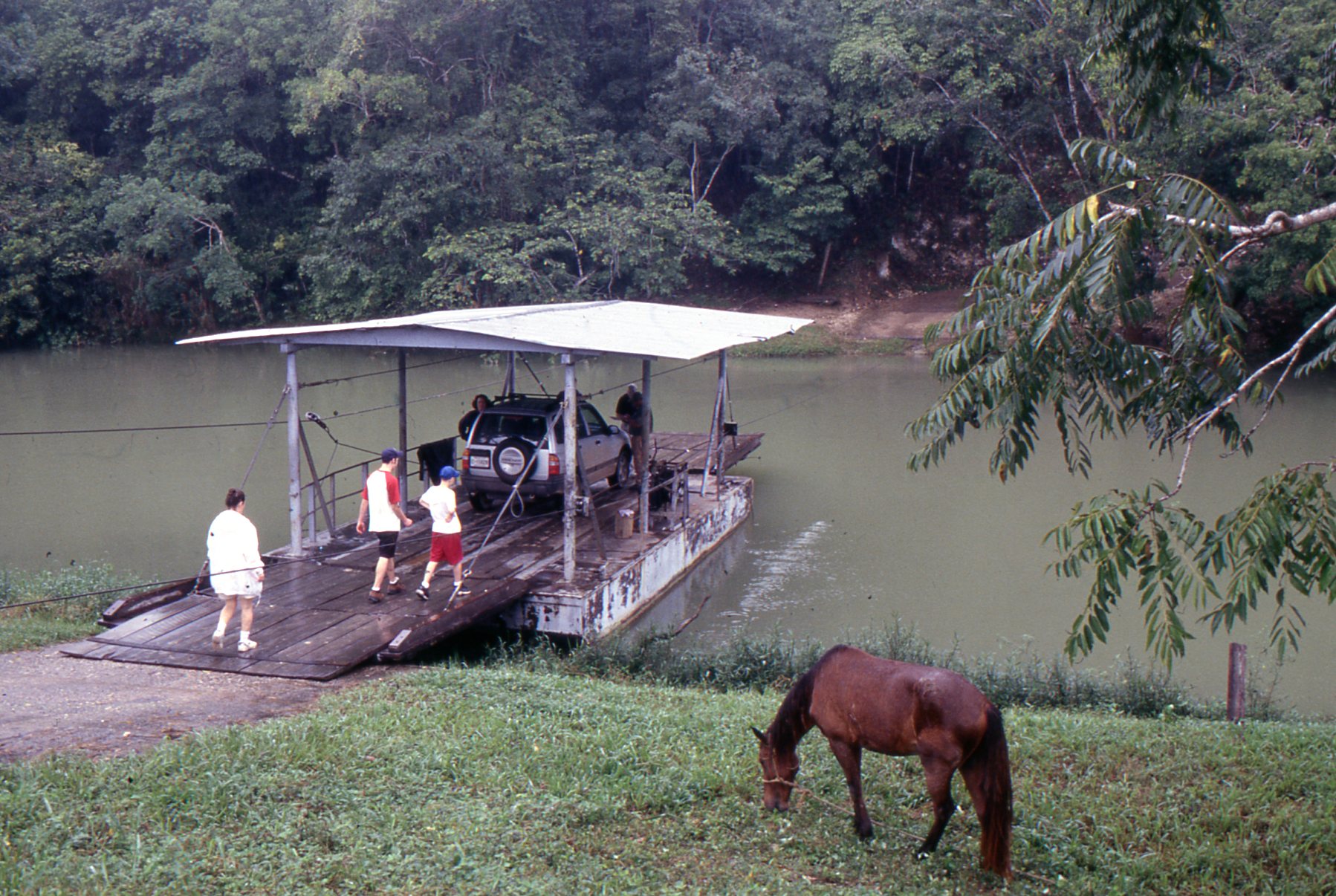 A hand-cranked ferry across the Mopan River leads to the ruins of Xunantunich.

Several sets of large-scope inscriptions are found on the sides of El Castillo, and the views from its roof look far across the rainforest canopy into Guatemala. There is also a ball court, a royal residence, and over thirty smaller temples being excavated. The day we were there barely a handful of other visitors appeared, which gave us the feeling of having a private viewing of the site, and let the ancient Mayan feel seep into our bones.

For further Mayan explorations, you can also do a lengthy day trip to Caracol (south from Cayo, up in the Maya Mountains), which is just beginning to be fully appreciated. Archeologists believe that at its peak, Caracol had a population of 200,000—which is nearly the population of all of Belize today! Day tours are also available to Tikal and, because of the complexity of transport needed, are as cheap as making the trek alone. However, having visited Tikal on a previous trip, I would counsel giving the ruins several days in order to truly take them in.

Simpler Mayan sites are also easily accessible from Cayo’s urban center of San Ignacio. Cahal Pech (the inelegantly named “Place of the Ticks”) is about a mile beyond the Hawkesworth Bridge and El Pilar is a dozen miles to the northwest. (There is no public transportation to the site.) 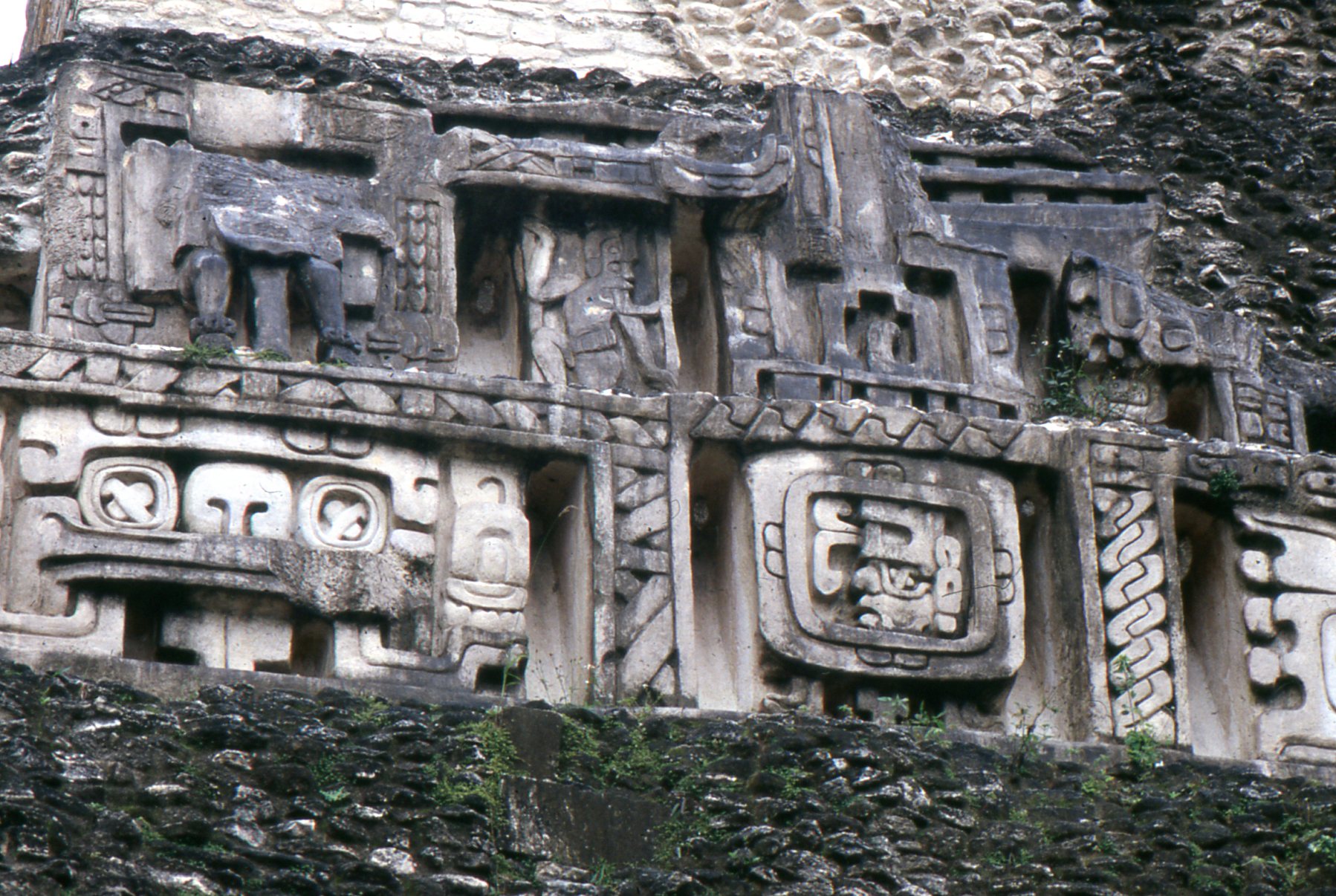 The Mayan-built stone temple of El Castillo at Xunantunich has lasted nearly 2,000 years. Its heiroglyphs are still only partially translated.

Adventure travel operations also offer full and half-day horseback riding, river kayaking, and tubing on the Mopan River. These can be arranged through the manager of your lodge or hotel, or sorted out in San Ignacio. (Not all plans come to fruition, of course. We were burned by two different promises of outings that never came to pass.)

And when you’ve had enough jungle rambling, the twin towns of San Ignacio and Santa Elena offer a pleasing variety of restaurants to swap stories in. The most famous is Eva’s—where nearly any manner of expedition can be arranged—but tastier fare is available at Martha’s Guest House, which offers huge burgers, fresh fish, and basic Italian dishes. Another hot spot is Cafe Sol; try the Thai noodle salad.

We ate twice at Serandib, the only Sri Lankan restaurant in Belize. Amidst ads for Ceylon tea and long tables packed with South Asian families, we enjoyed a tasty variety of curries and seafood. When the weather is right, the outdoor patio in the back is a refreshing hideaway from the town.

For all its hidden feel, Cayo won’t leave you stranded. If you’re heading west, Guatemala is barely half an hour away. The route to southern Belize via the Hummingbird Highway forks south at Belmopan, less than an hour to the east. And even Goldson International Airport or the boats to the offshore cayes can be reached in a couple of hours.

Not that there’s really any need to rush away. Rain or shine, the hammocks on the verandah are calling, and the reds and golds and greens of the wildflower canopy seem to want to ease their way into my senses for yet another day.

This piece was originally published in Transitions Abroad, July/Aug 2007.