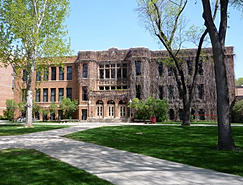 Webmaster Stephen Kral (if you like elements of this site, he’s the one to thank) interviewed me last year, for possible publication in a West Coast journal. That never happened, so I figured I’d share it here:

SK: What books were in your home growing up? What stories first captured your imagination?

DG: Our home was stuffed with thousands and thousands of books from both my parents’ personal libraries. We siblings augmented those with our own growing collections built around trips to the Salvation Army store on Nicollet Island’s skid row out in the middle of the Mississippi, where books cost a nickel and once a year Grandmom would roll into town and take all us kids to buy as many as we could carry.

I can never remember a time when I didn’t love stories. The first to really capture me were Winnie the Pooh stories, which my mother read to me when we lived in London. When I was 10 or 11, my dad shifted all his childhood books into our house and I immediately dug in. Cursed Be the Treasure . . . The Black Liner . . . Treasure Island . . . Bomba the Jungle Boy at the Moving Mountain . . . names I’ve never forgotten.

In another way, the first stories to grab me were the ones told by my parents and grandparents about their adventures around the world. I knew that if I wanted to sit at the table and enter the conversation I’d need to head off and have some adventures myself!

SK: What kind of stories are you interested in writing today?

DG: Ones that won’t let the reader go. Ones whose influence works around in the back of your mind and reappears at unexpected moments. I tend to find my way into the stories by selecting the terrain (or setting) on which I’d like to work. Then I start mulling over the cultural specifics of the place, or which characters might be involved. Plus I’m always looking for converging themes that can be developed. I want to reshape my readers’ expectations and understandings of life.

SK: You have described yourself as “a lifelong vagabond traveler,” as someone interested in life’s side turns and its trails into the unknown. In what ways do you think this vagabond sensibility influences your writing?

DG: The world is a large and wondrous place. As Kipling said, “The wildest dreams of Kew are the facts of Kathmandu.” I’m interested in creating and exploring characters who are willing to step out towards the edge of the map and keep going. I also view my passage through life as a series of twists and turns, following unexpected bends in the road.

I think the vagabonding approach has also helped me to hold the world’s demands at arm’s length. I’m a deeply Bible-believing Christian, and one of the messages of that book is that we are but wayfaring strangers, traveling through this world but never at home in it. Our true home awaits elsewhere. I’ve been on the road (spiritually, as well as physically) my entire life. Any demands made by a particular culture, or state apparatus, or whatever, are mere ephemera compared to eternity.

SK: Herman Melville could also be described as a vagabond of a kind and he considered the education he received as a young man on a whaling ship to be more valuable than what he might have learned at a Yale or a Harvard. As someone who has also worked on the deck of a ship, do you share Melville’s sentiment?

DG: I was very successful in academic settings, so I wouldn’t want to act as if they have no value. But I was always restless sitting in the classroom. Real life seemed to be going on outside the windows, while we were being presented sanitized and compartmentalized versions of the same thing. Truth be told, I’m not all that fond of working as a deck hand (Worst job ever? Trimming grain . . . especially for someone with severe hay fever), but the characters we encountered, the ports we explored, and the endless series of mad-panic crises we faced gave me more depth of insight into the thrust and meaning of life than anything a professor could choose to impart.

SK: To what extent is your writing autobiographical?

DG: Much of it is heavily autobiographical. I realized early on that what drove me to write was the same impetus as Jack Kerouac had—to mythologize my life. Of course, I’ve written pieces that are a long way from reality, but most of the time I’m drawing heavily on personal experience.

SK: When and where do you write? What is your writing routine?

DG: I do best in the mornings, especially when working on first drafts. Back in the day, aside from my writing partner (the late, great August Wilson), I seemed to be almost the only writer around who worked in restaurants and cafes, but with the rise of coffee shops and laptops, that’s become a commonplace. For me, the public settings provided a “white noise” background that kept me energized, but nowadays there’s no bustle, just a lot of silent people tap-tapping away. As a result, I’m now most likely to work in my tiny study at home.

Revising often goes well at night, when I can stretch out in a comfy chair and let another side of my personality take over, so that I feel as if I’m revising somebody else’s work. I’m still such a cut-and-paste guy that I’ll often chop out bits and pieces of the story I’m working on and slide them around on a table to see how different sections might work in alternate spots.

SK: As someone who has worked many odd jobs throughout his life, would you consider the work of a writer as much different than that of other lines of work?

DG: As I tell my son Evan, who has a burgeoning writing career, every job provides “material.” As a writer, you’re not just doing the job, you’re also observing who else does the job, and why they stick it out, and what specific techniques or interaction patterns are involved. You may end up finding just the slightest sliver of useful material from a specific job, but anything that gets you out of your ivory tower and into the big wide world is valuable. I wrote an entire book (Tales From the Tinker’s Dam) built around the misadventures of running a country pub in Wales.

SK: I understand you regularly take part in an annual youth writing workshop, how did you first get involved with these workshops?

DG: I joined the COMPAS Writers & Artists in the Schools Roster in 1986. This made me a Teaching Artist, who would travel throughout the state doing short term residencies in schools and helping kids discover the joy of writing stories. (A few years later, I took over the administration of that program and have continued to this day.) In 1990, another group wanted to start an annual Young Authors Conference, for kids in grades 4-8 who were already excited about writing. I helped them plan the event and participated as one of the teachers. I’ve been at that Conference every year since—and will be back at it again next spring.

SK: What advice would you give to a young writer?

DG: Stay nimble—everything will change. Stay committed—everybody will offer conflicting diversions. Dig deep enough within yourself to find pain or confusion that can be spilled onto the page. Lower your ego; raise your observation skills; ignore trends. Most of all, learn the joy of revision. You’ll be doing it forever.

SK: Are you working on anything currently?

DG: I’ve recently wrapped up the latest version of a short story collection that I’ve been reworking for years, called Wrestling with Angels. Trying to find a publisher for that and a coming-of-age novel called Paradiso.

I’m also working on some travel articles from recent trips, but the market for those has changed dramatically. I may transform some of them into a book-length manuscript I keep fiddling with. Hard to tell what shape that will end up taking, but that’s part of the joy of the process.