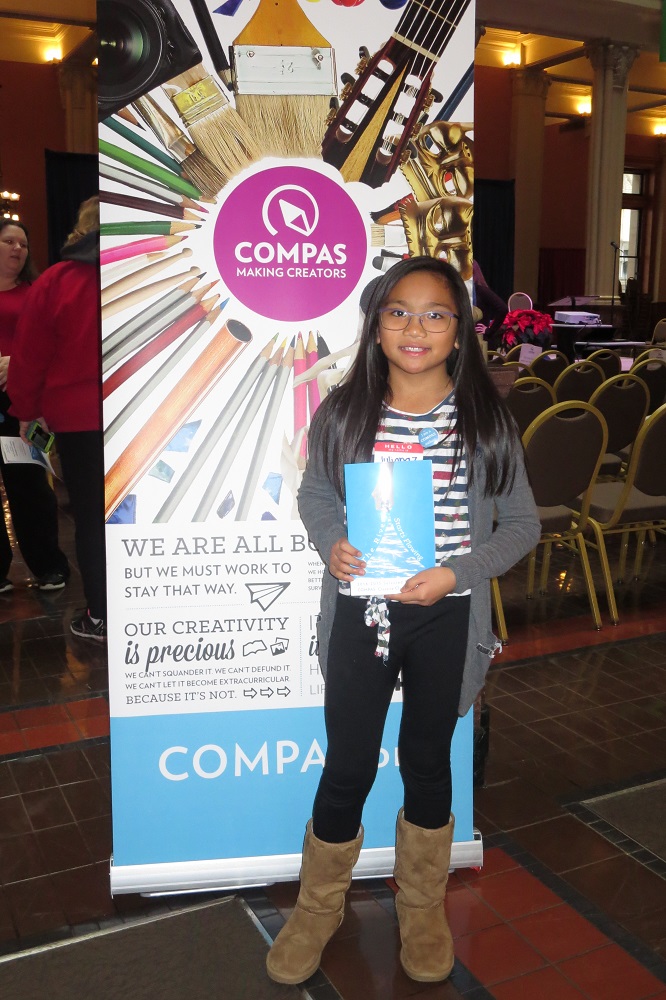 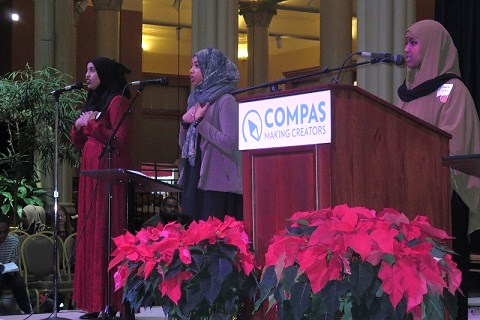 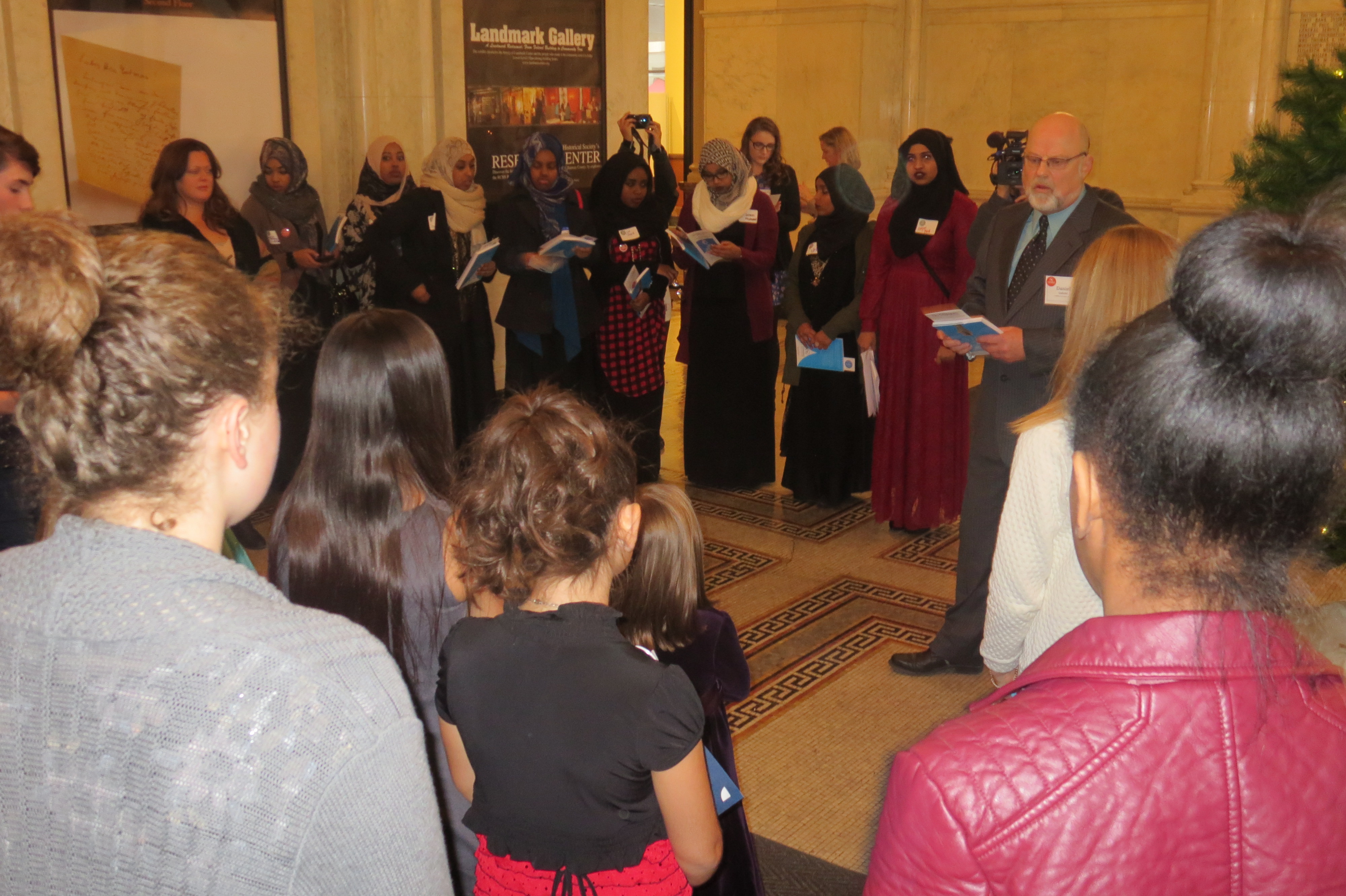 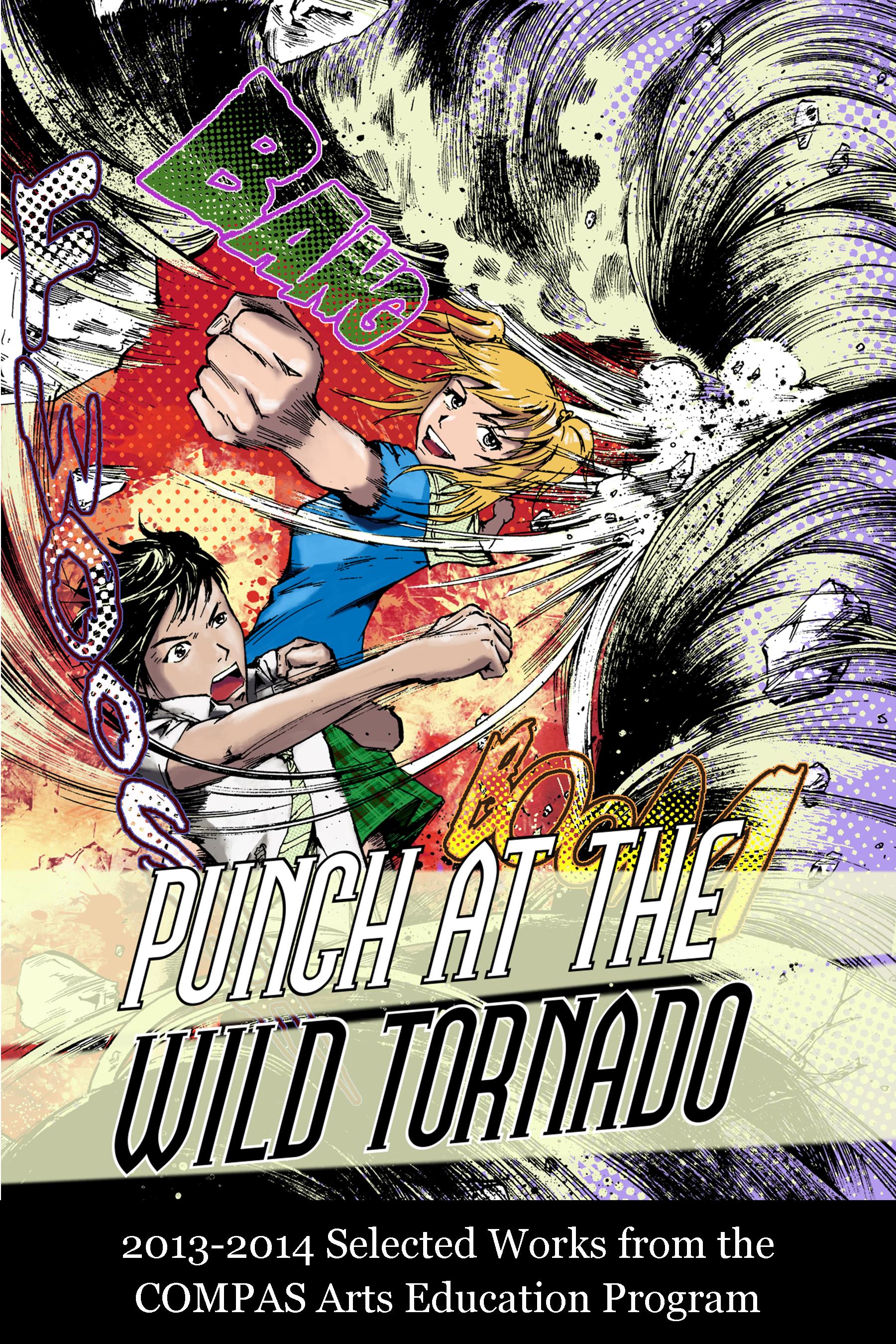 When the world comes at you hard, fight back! Words can be a powerful weapon—and COMPAS artist Dennis Lo depicts this brilliantly.

Last Saturday I had the privilege of gathering at Landmark Center in St. Paul to celebrate the publication of the 36th COMPAS Anthology of Student Writing, entitled Punch at the Wild Tornado. As both Arts Program Director for COMPAS and, for the first time, Editor of the Anthology, I had a particularly high stake in the game. What a delight to hear the young people loose their hopes, fears and imaginative speculations into the resounding confines of Landmark’s classical Cortile. A grand time was had by all! 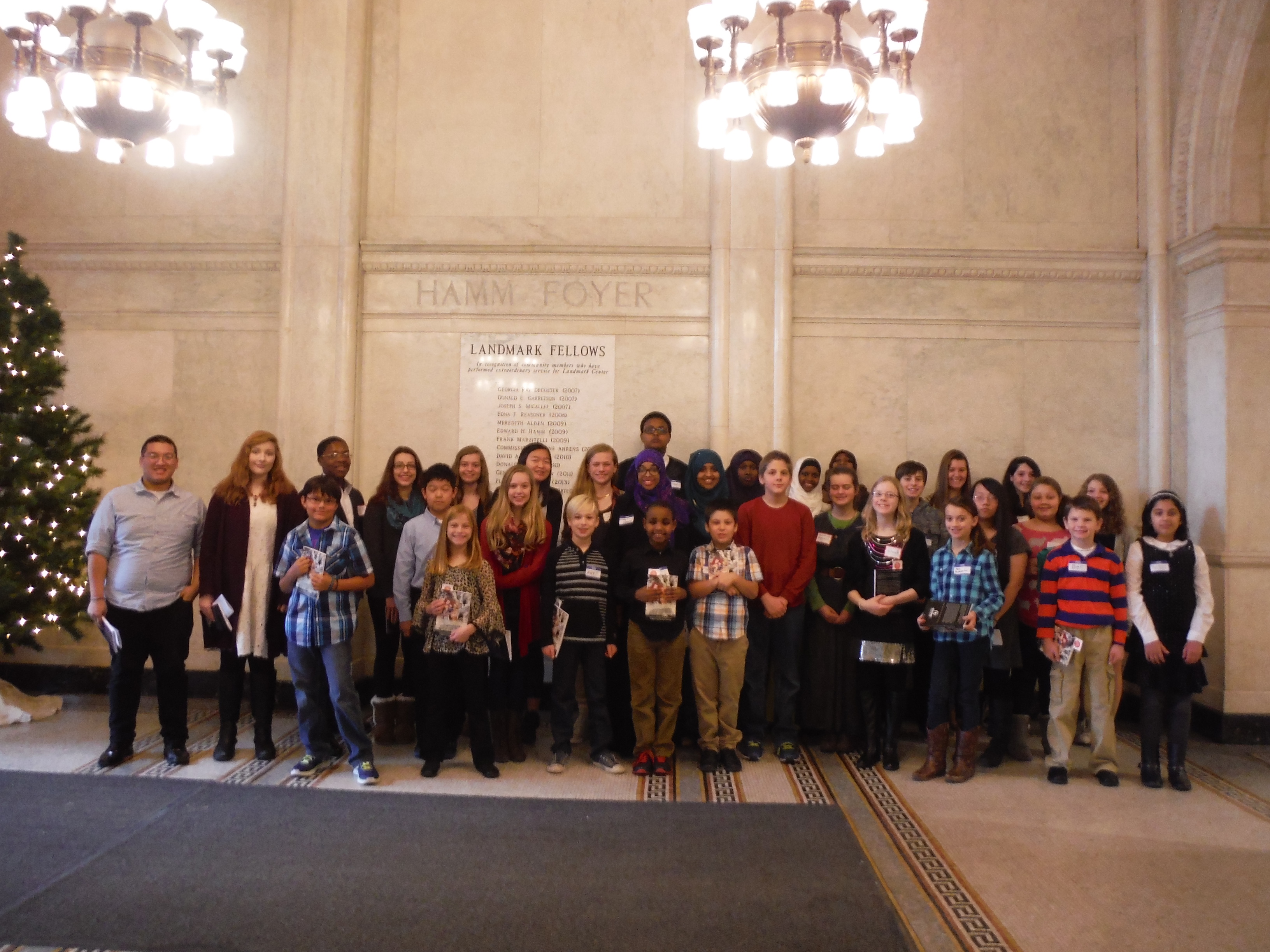 Student authors gather at the start of the Publication Celebration in Landmark Center.

It’s easy to dismiss the rising generation as self-obsessed or clueless about how the world really works, but the young voices in this book belie those stereotypes. We hear from new immigrants describing the treacherous paths they took to reach Minnesota and rural kids embedded in nature and alert to the details of the changing environment around them. We encounter tender poetry and profound insights from kids who have not yet reached double digits in age. (“Poetry is . . . a lake deeper than you can think” says third grader Leo Fridley in the very first piece in the book.) There are glorious tales of adventure (check out “Pendrick and the Serum” or “A Letter I’ll Never Forget”) and poignant insights into lives that stutter and stumble forward.

Perhaps nothing is more affecting than the series of voices from Rochester STEM Academy, a heavily-Somali charter school that worked extensively with Hip Hop spoken word artist Frank Sentwali. Listening to the young women (and one young man) sound forth on the dis-junction they see between their lives and media reports reminds us both of the complexity of race relations in this country and the global links we all share, regardless of country of origin.

A handful of the pieces were selected by judge Joyce Sidman (a COMPAS Roster Artist with a national reputation in children’s literature) as winners of a Lillian Wright Award for Creative Writing. Of the six winners, two that jumped out at me both came from middle schoolers—a vigorous spoken word piece by Sophia Rapacz that said everything I wish I’d had the wisdom to say back in junior high days, and an affecting, wistful memoir by Kira Greenfield that was written as part of a unit on watersheds, but took the topic in a completely unexpected direction. 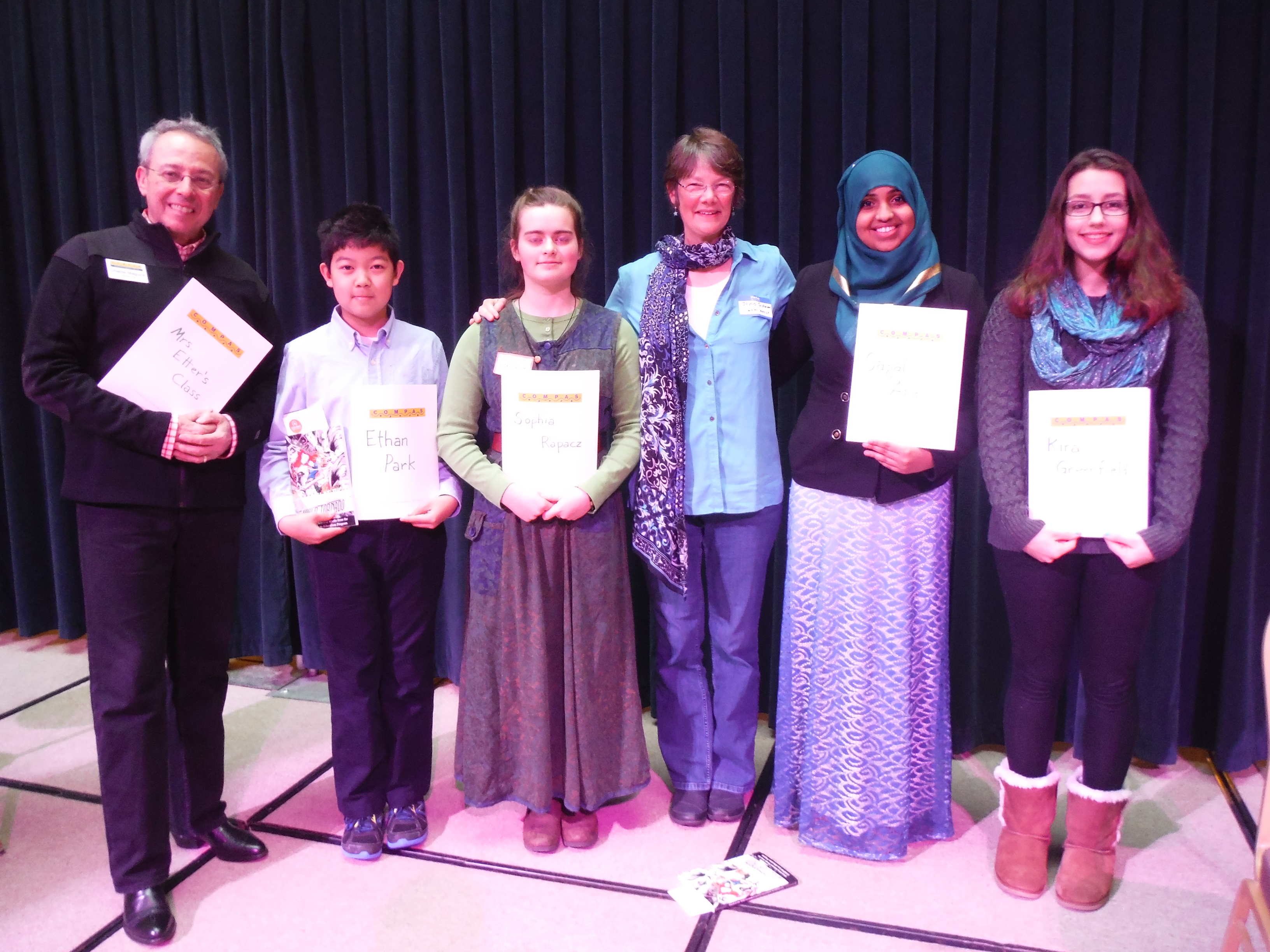 The modern world may be infatuated with the digital realm, but there’s nothing like a solid, printed book to provide a direct link to the past 5,000 years of writers at work. The finest repositories of human cultural heritage are these simple paper rectangles that reveal so much of our highest and deepest aspirations. It comforts me to know that a new generation of writers stands ready to fill those pages.